Departed From Port Aransas onboard the Gulf Eagle from Deep Sea Headquarters.

After a few days of very calm seas the winds were still dead calm on Saturday at 4:30 AM. Unfortunately the boat was experiencing a mechanical issue as we waited to board at 5 AM. We anxiously awaited for the problem to be fixed and it turned out to be a bad wire too the battery. Finally we boarded and set sail at 6:30. As we cleared the jetty in the dim dawn light the seas were not quite glassy calm like they were yesterday. The winds had risen some yesterday afternoon and we were now in about 2 foot seas, still calm at least.

The first seabird of the day was a Brown Booby that we flushed off the water near a shrimp boat and pretty close to shore. It did a quick flyby and it didn’t get close enough for a satisfactory view. Not long afterwards a Sabine’s Gull whisked by down the starboard side and continued towards shore. Undoubtably the same bird found later in the morning by birders at the Port Aransas Jetty.

We passed a couple shrimp boats but only Royal and Sandwich Terns and Laughing Gulls we perched in the rigging. Each boat did have a small pod of Bottlenose Dolphins in attendance. Black Terns occasionally flew by as we cruised the shelf. A Common Tern, Chuck-wills-widow, Swallows and warblers also flew by heading west towards shore.

As we approached the shelf edge we picked up a few Cory’s Shearwaters and a couple Audubon’s Shearwaters sitting on the water. We had great extended views of most of the Shearwaters today which were lifers for many of the first time pelagic birders onboard today. However one shearwater must have escaped our notice initially. About the same time as one of the closer Cory’s was following along with the boat a second distant shearwater was photographed, that at the time was passed off as a Cory’s. Ryan Rodriguez, Jeff Sexton and Jon McIntyre all managed photos of this distant bird. On Sunday these photographs revealed that the bird was a Great Shearwater seen around 10:15 AM.

A flock of 3 Band-rumped Storm-Petrels made a nice show but we couldn’t get them to come into a chum slick for close-up views.

As we cruised into ever deeper waters as far as about 84 miles out and in 3,000 feet of water a pair of Brown Boobies follow the boat for a long time putting on a nice show chasing and snagging a few flying fish. The seas were now glassy calm 1 foot or less swells. Shearwater activity had dropped off so I decided to change course and work towards the north into waters in the 1,500 foot range where we had seen the last shearwaters.

After 1 pm we started on the cruise back in and still found a few more Cory’s, Audubon’s, Brown Booby. A distant Magnificent Frigatebird was spotted over a small group of sport fishing boats. A number of neotropical migrants entertained us as well, including a Blackburnian Warbler that landed on the top deck. A few other warblers and swallows were also seen and photographed. A very obliging Chuck-Wills-Widow followed in our wake for 10+ minutes allowing everyone to get great views of it.

Not much of interest stopping at a few shrimpers again just the usual gulls and terns and a larger pod of Bottlenose Dolphins.

Overall a great trip with 7 species of seabirds and quality views of most of them. Here are the bird lists:

Here is a link to the eBird Trip Report for this trip.

Here is a map of the trip track as recorded by my GPS.

There will be one more Texas Pelagic a 48 hour Ultimate Trip from Freeport on Sept 25 – 27, 2022. There is still space available for this trip during a prime season for rare shearwaters. 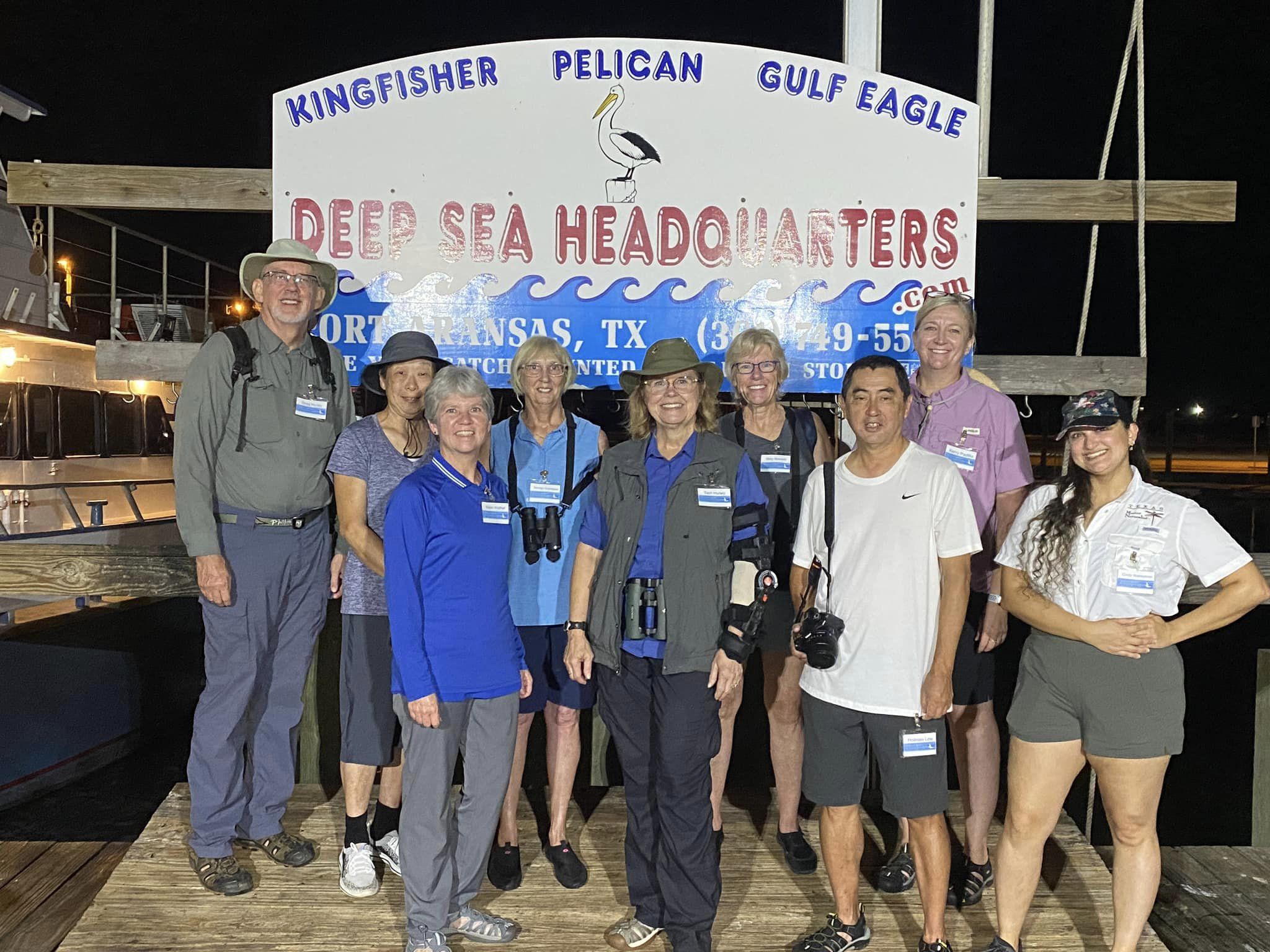 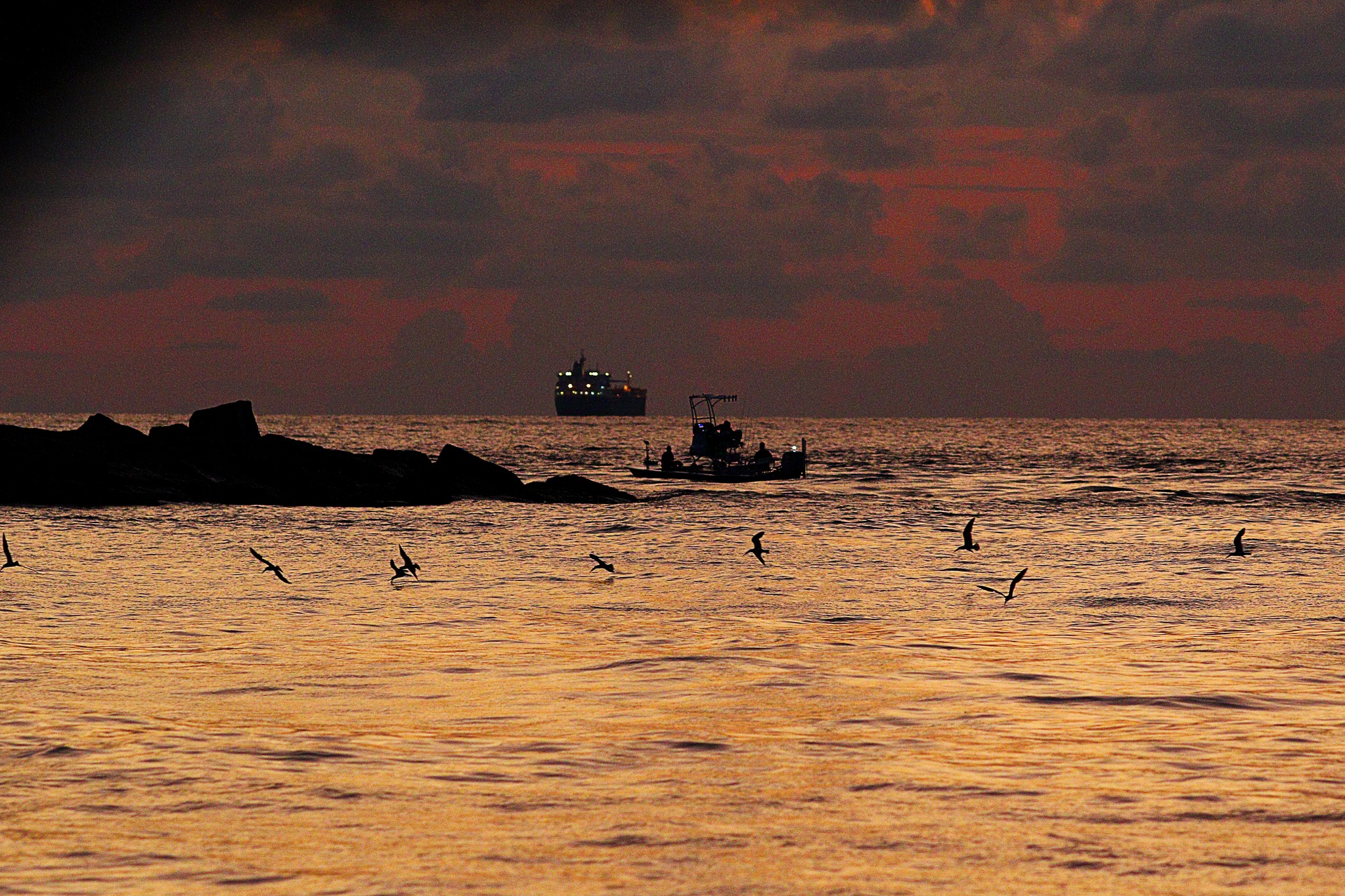 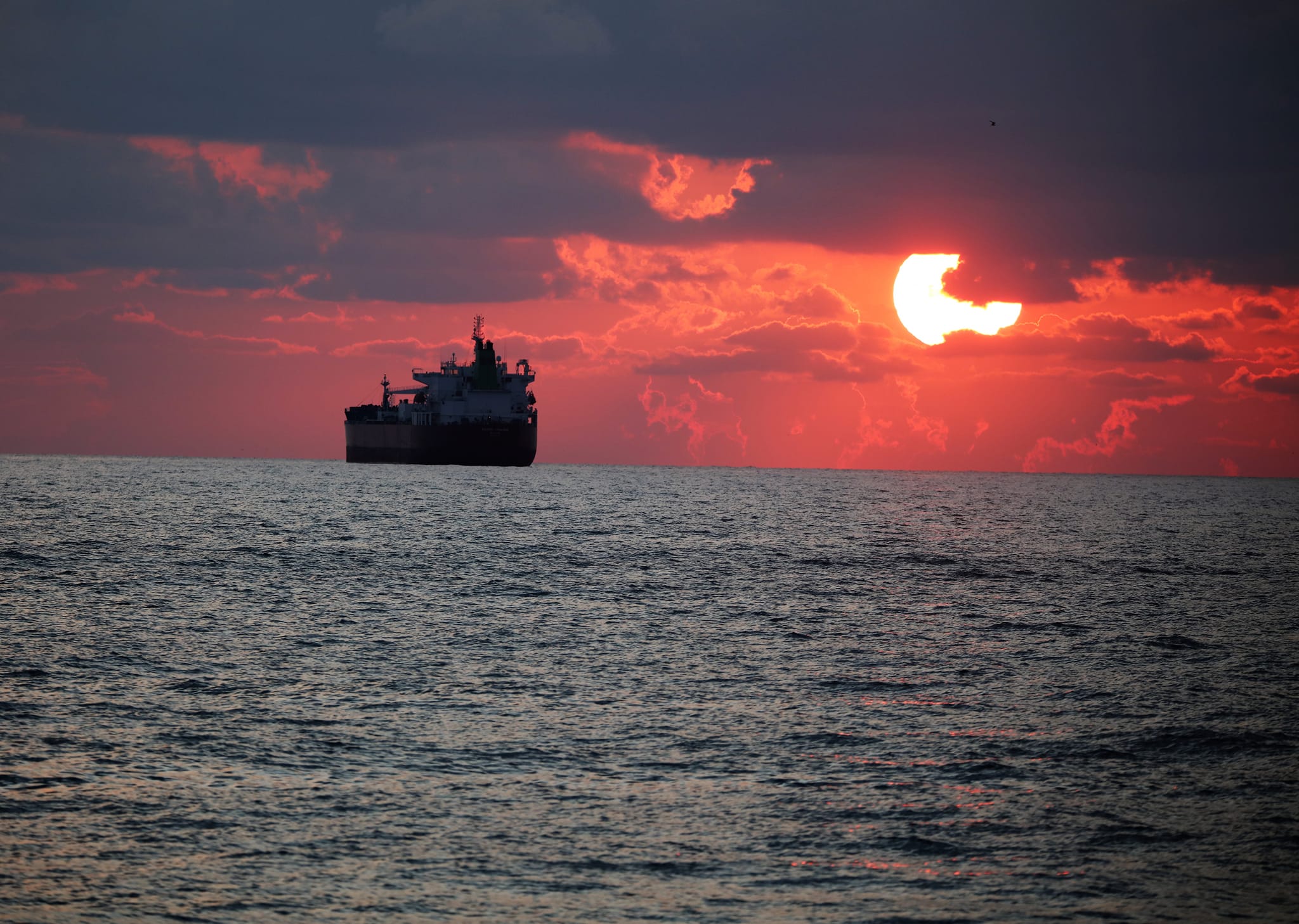 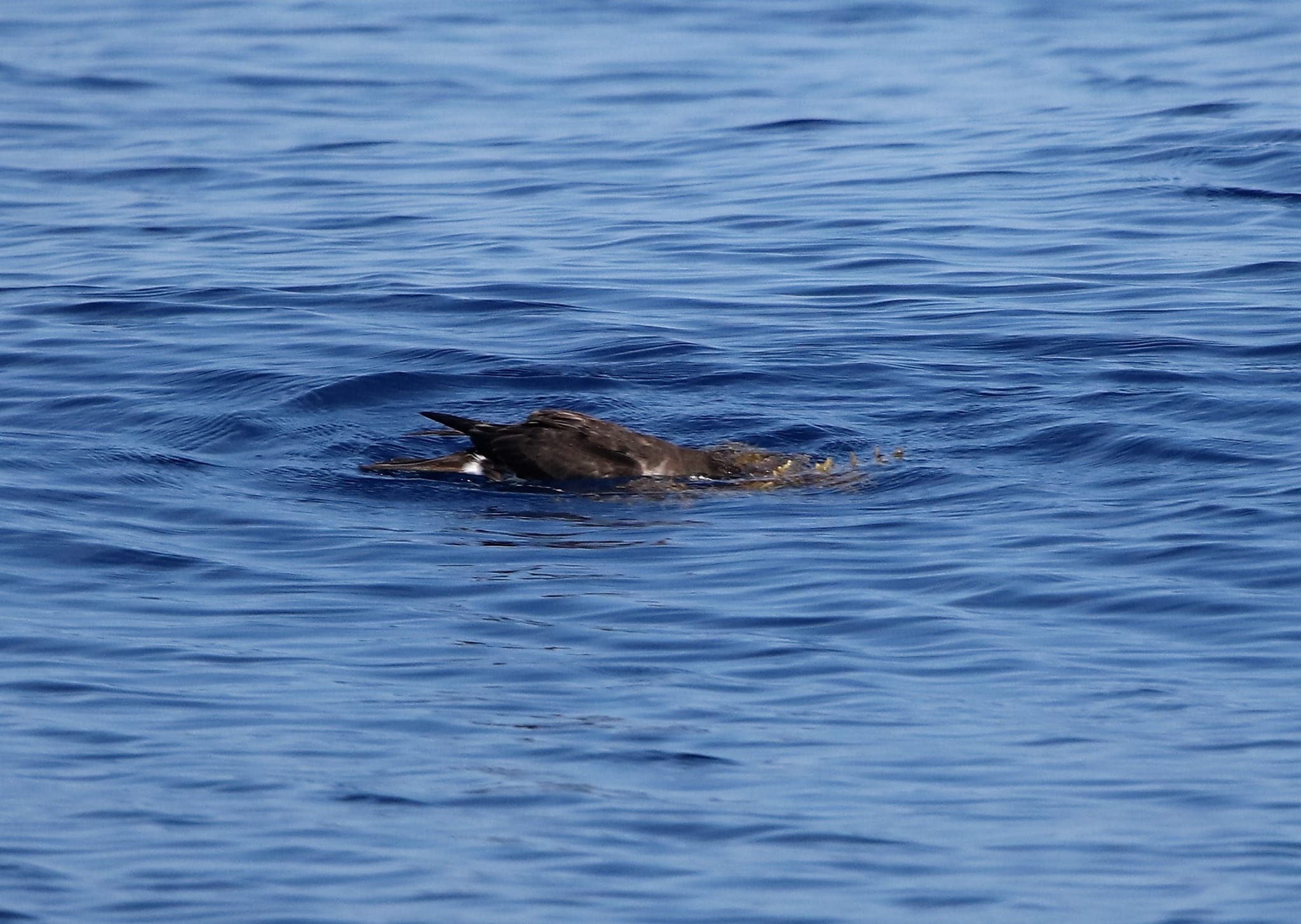 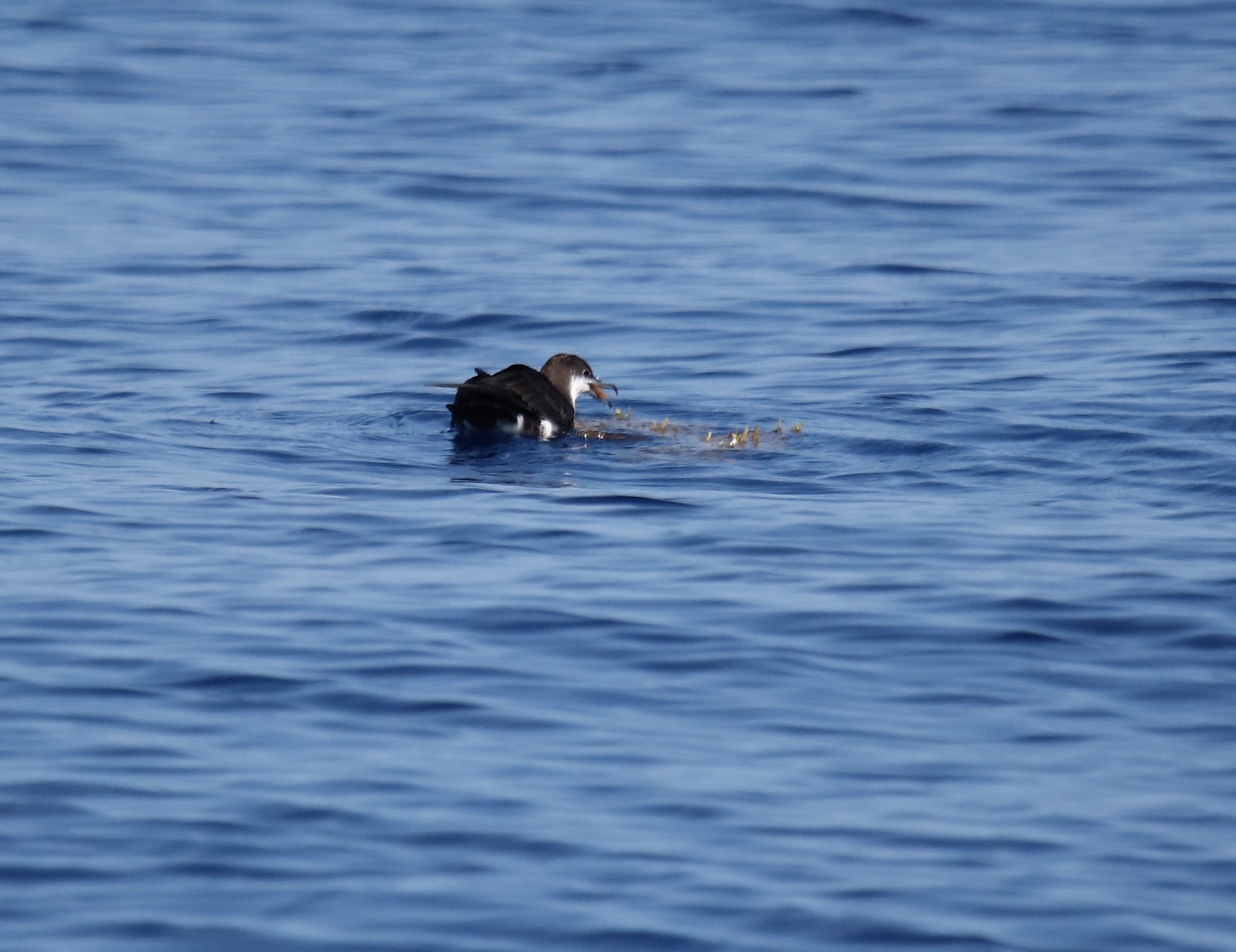 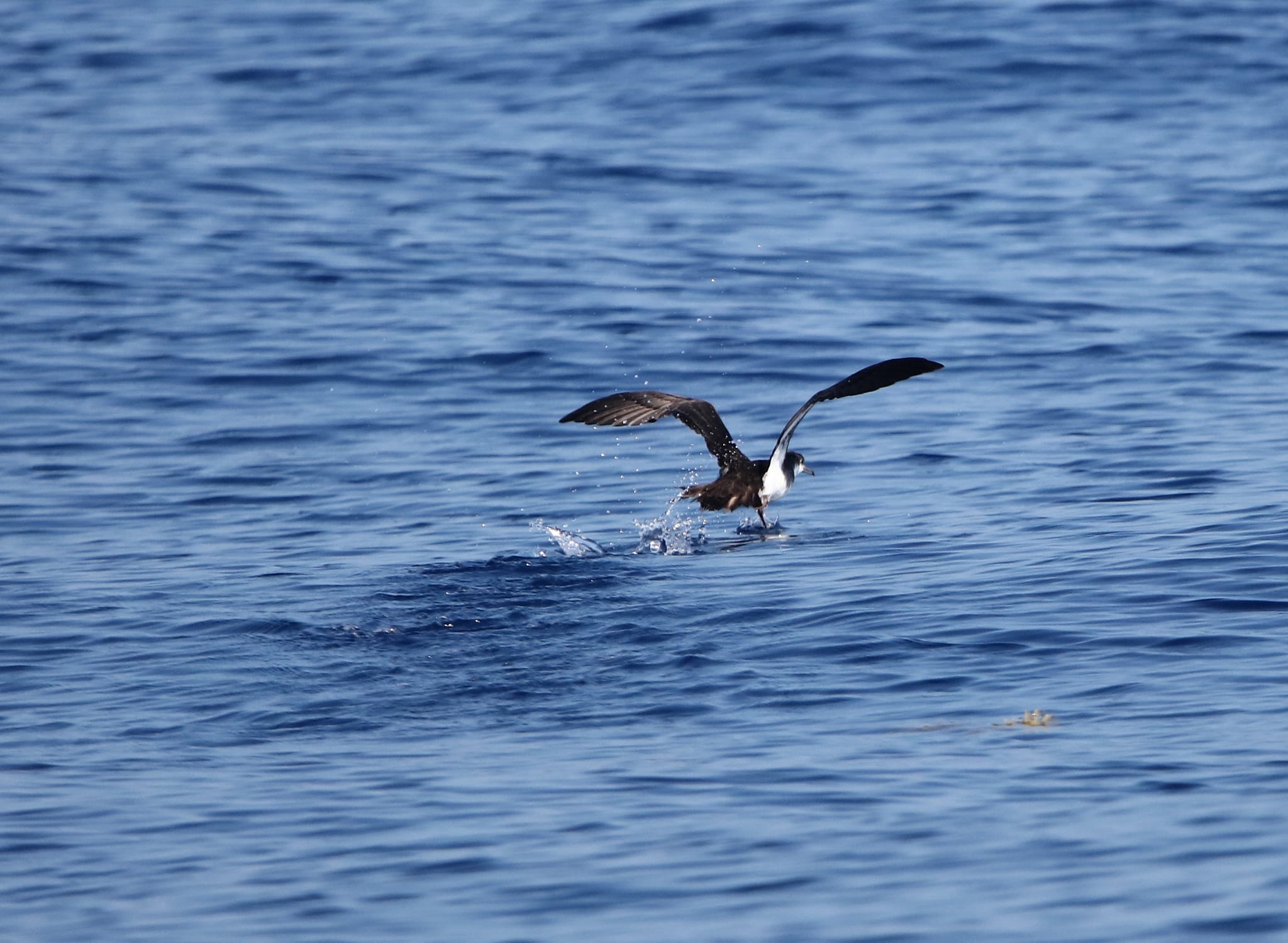 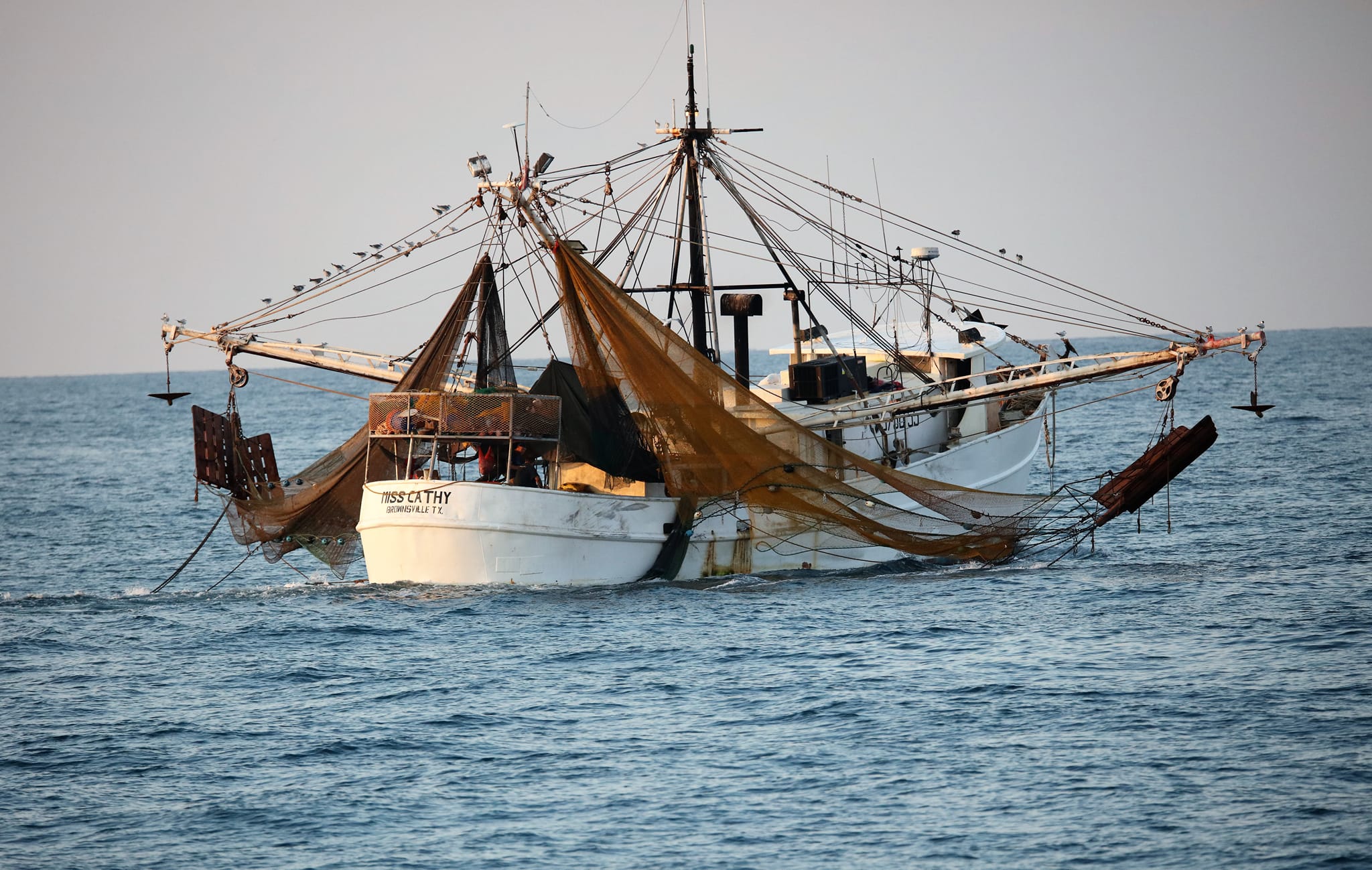 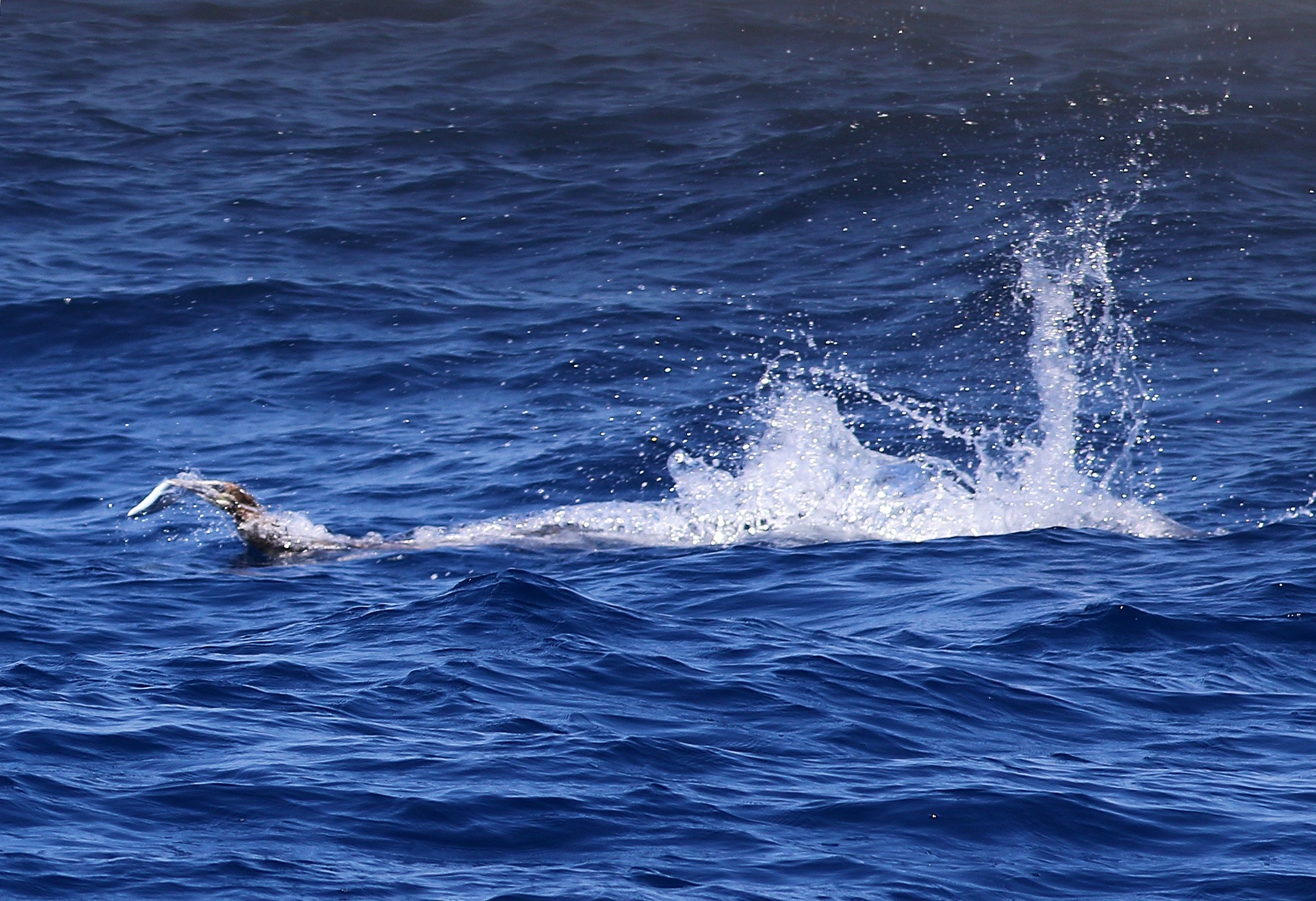 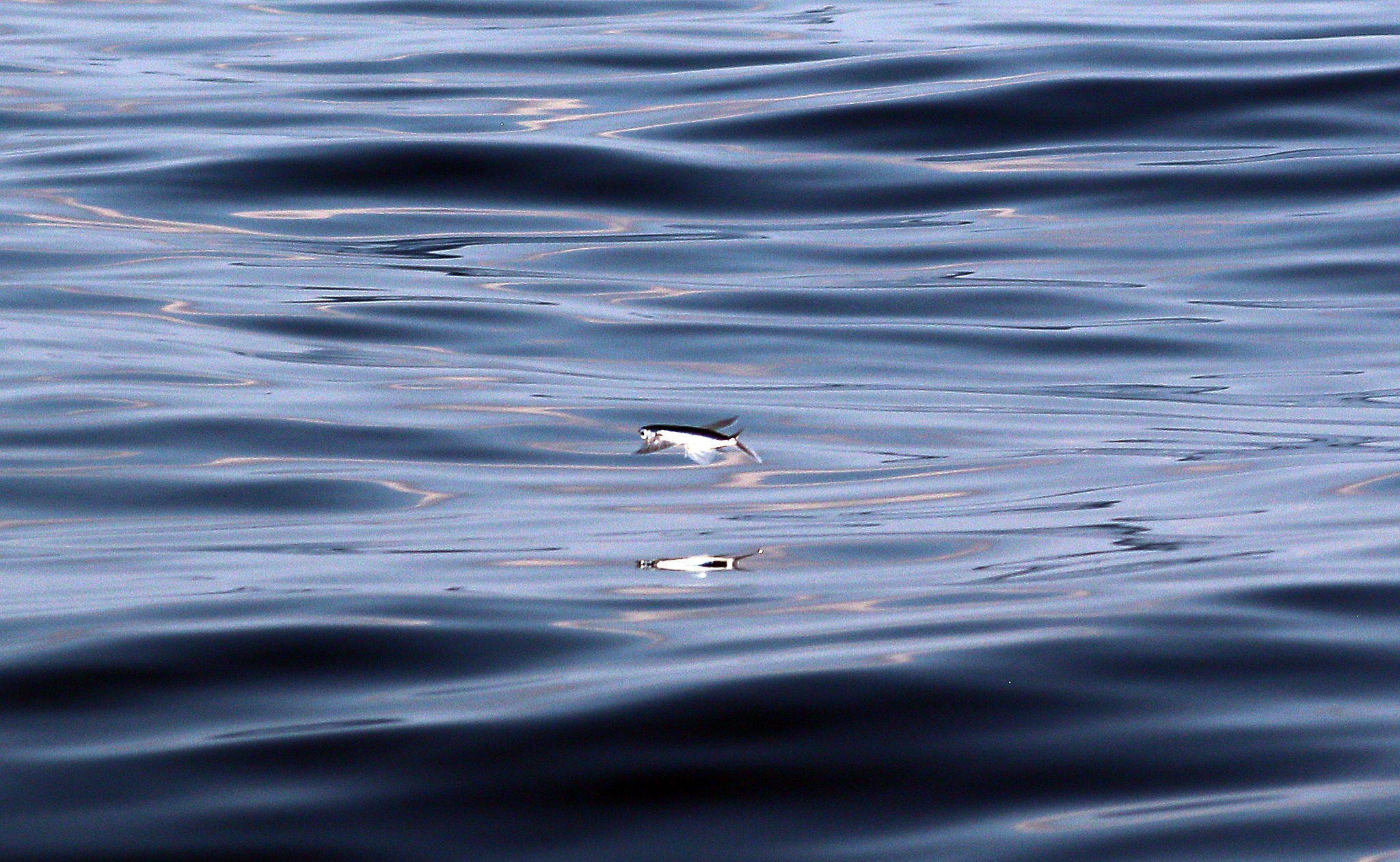 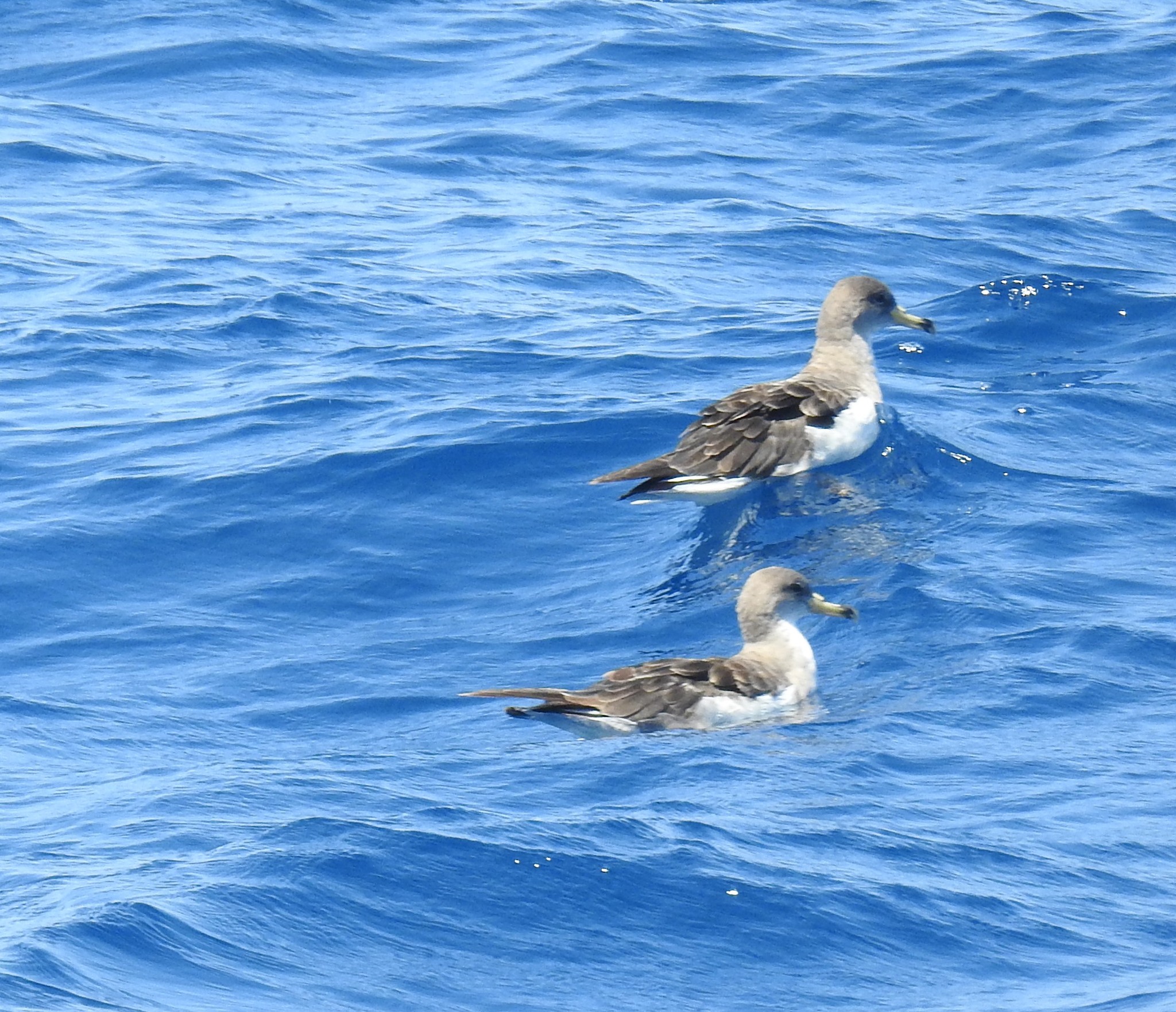 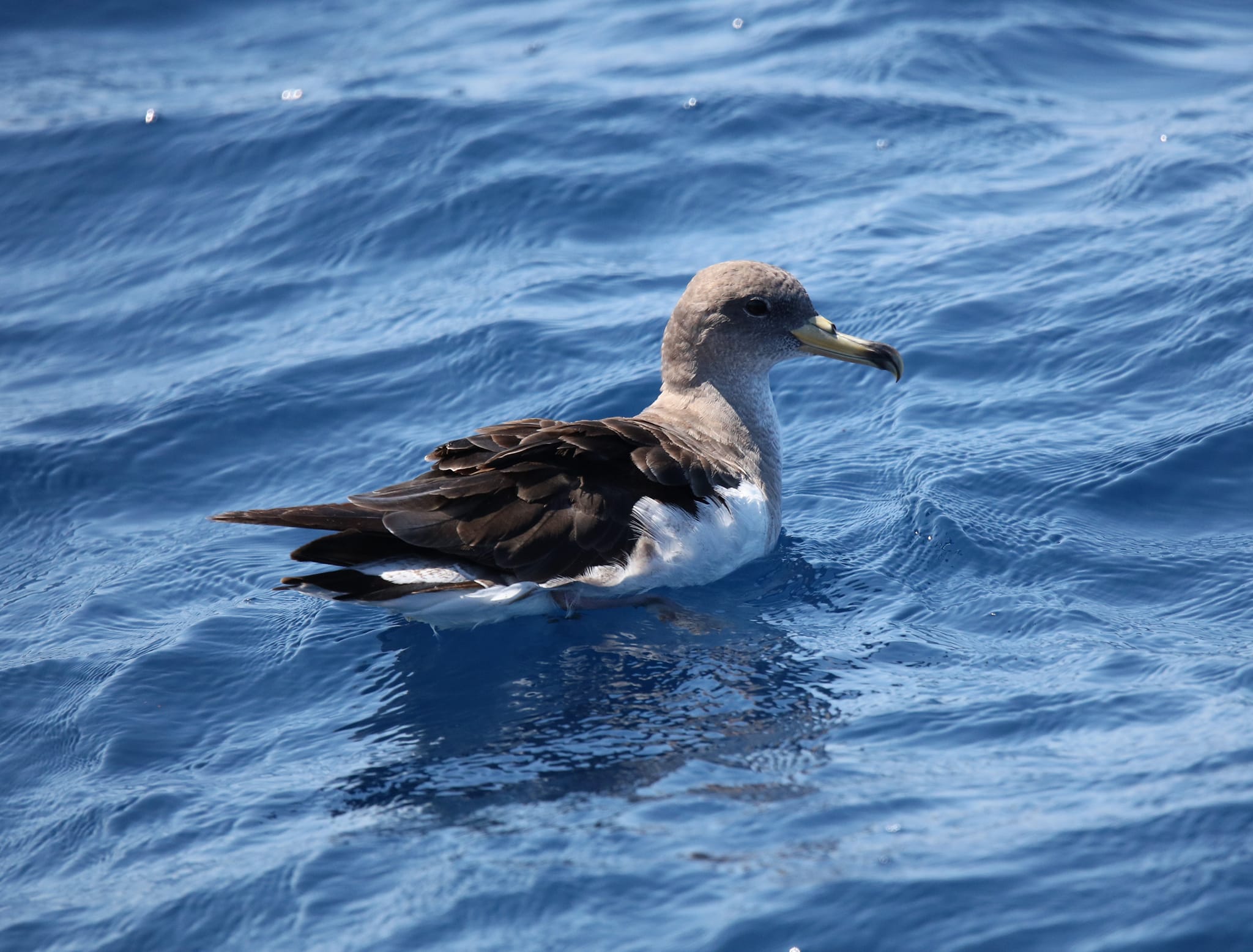 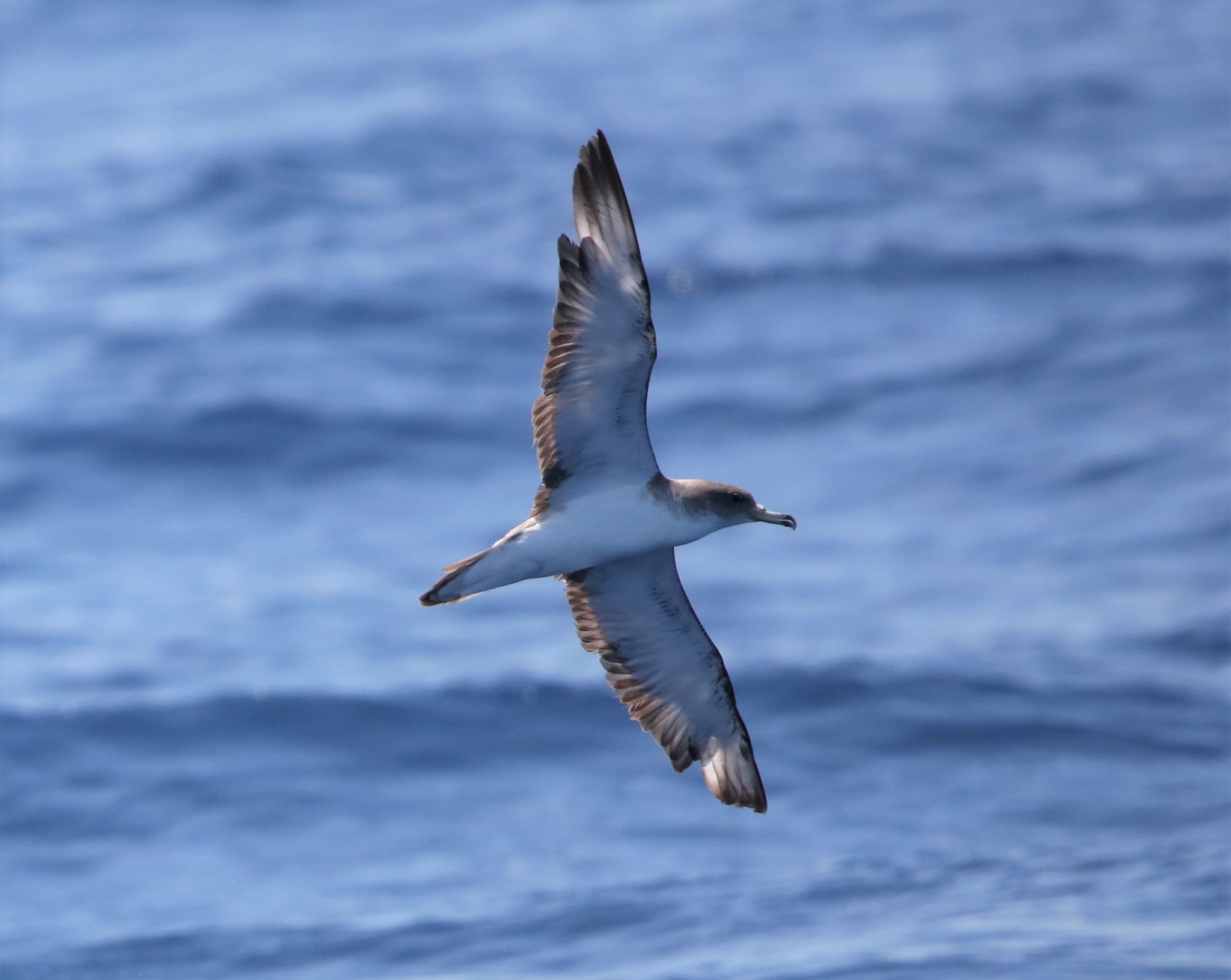 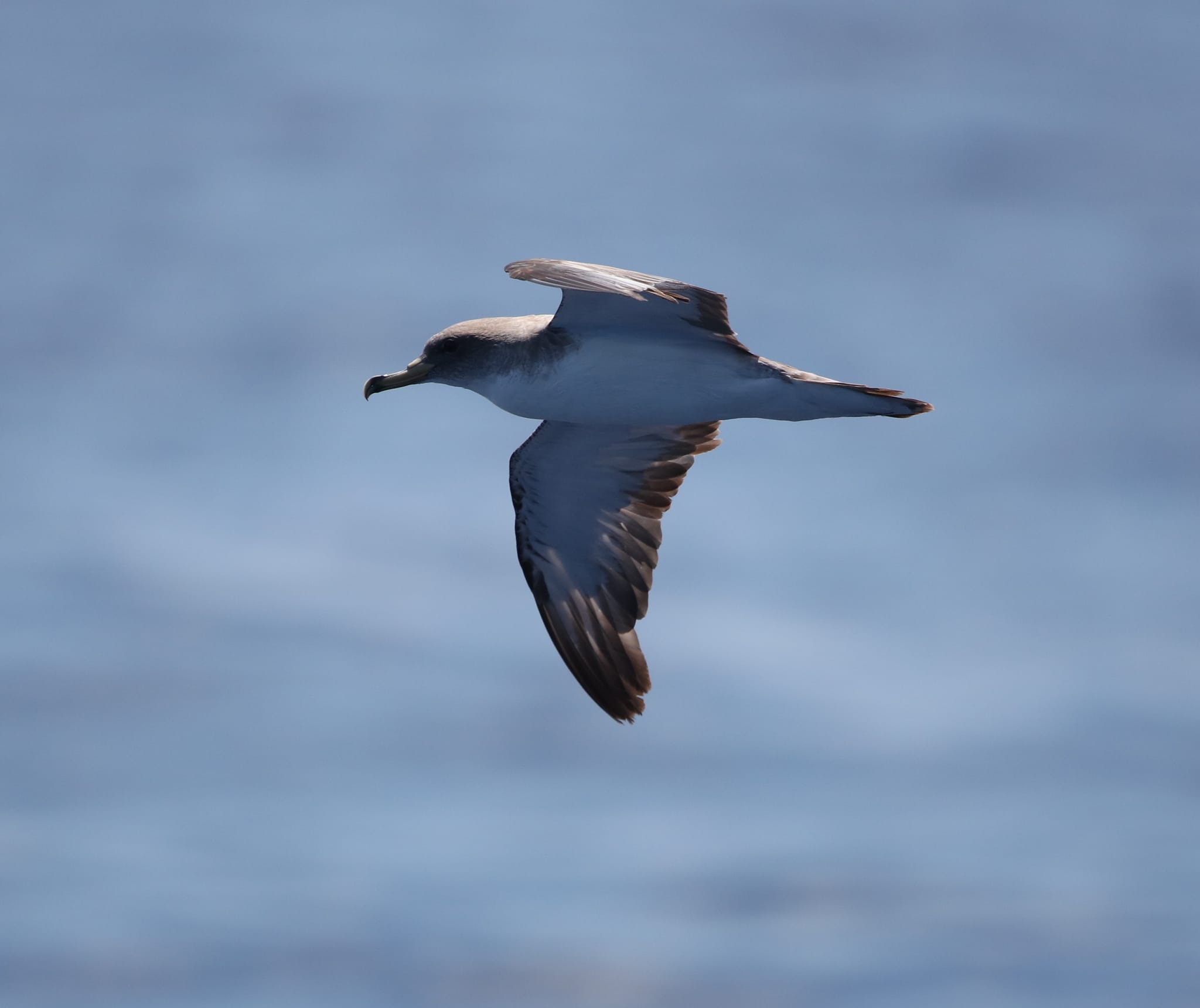 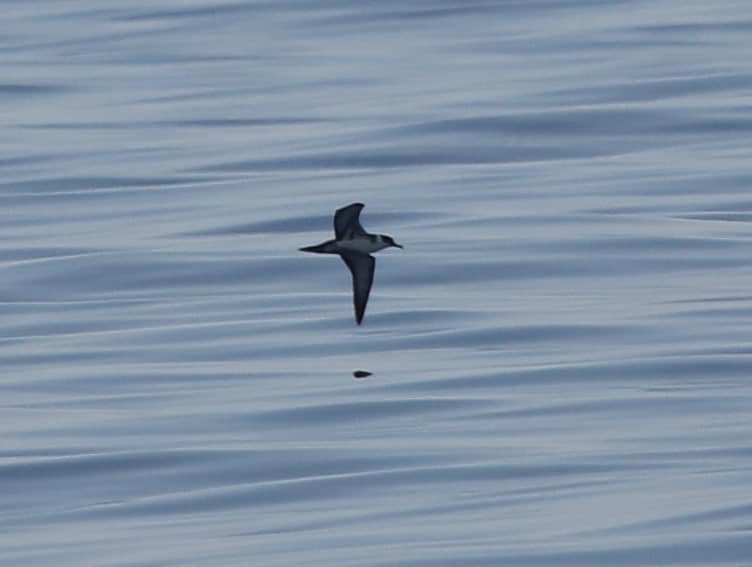 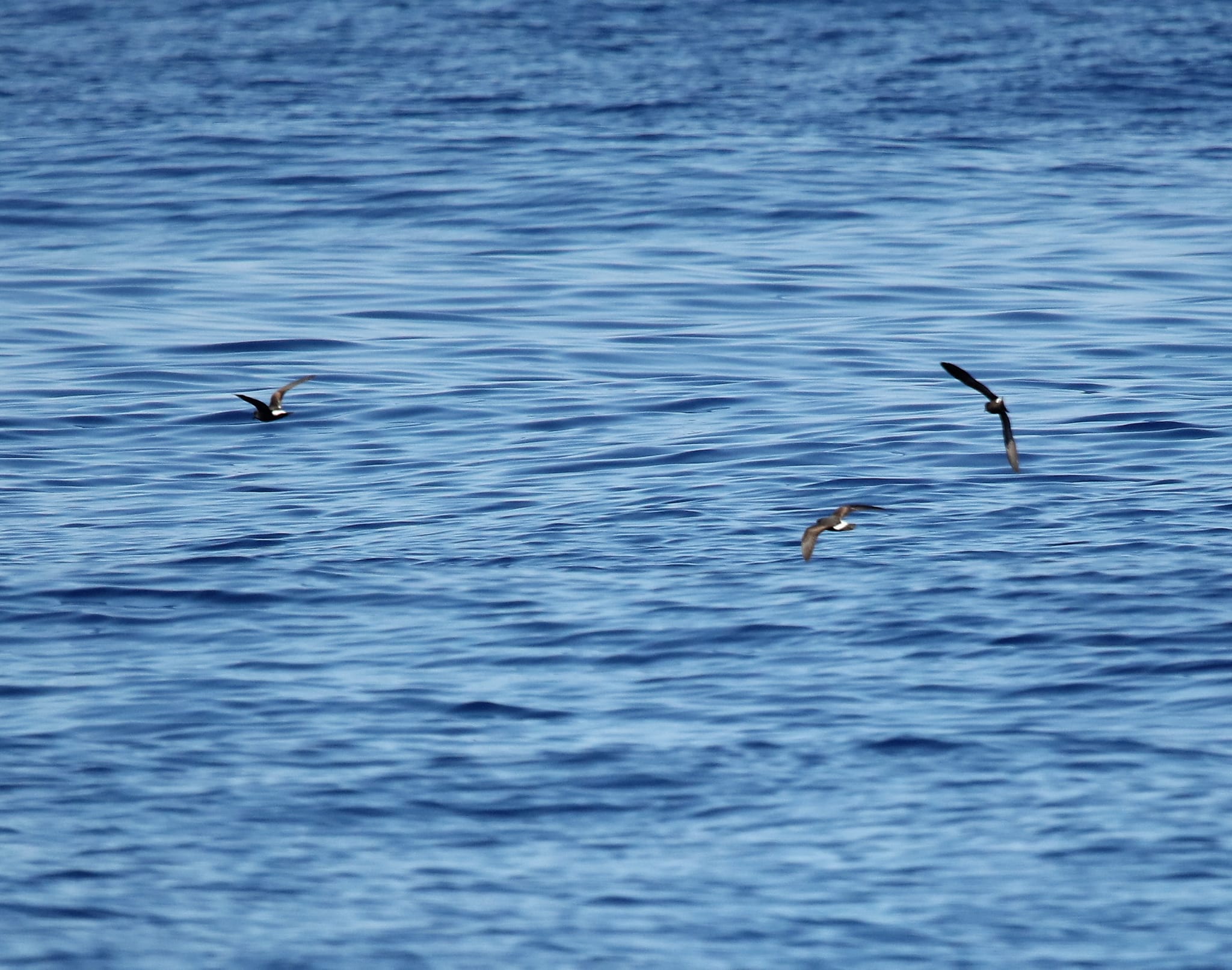 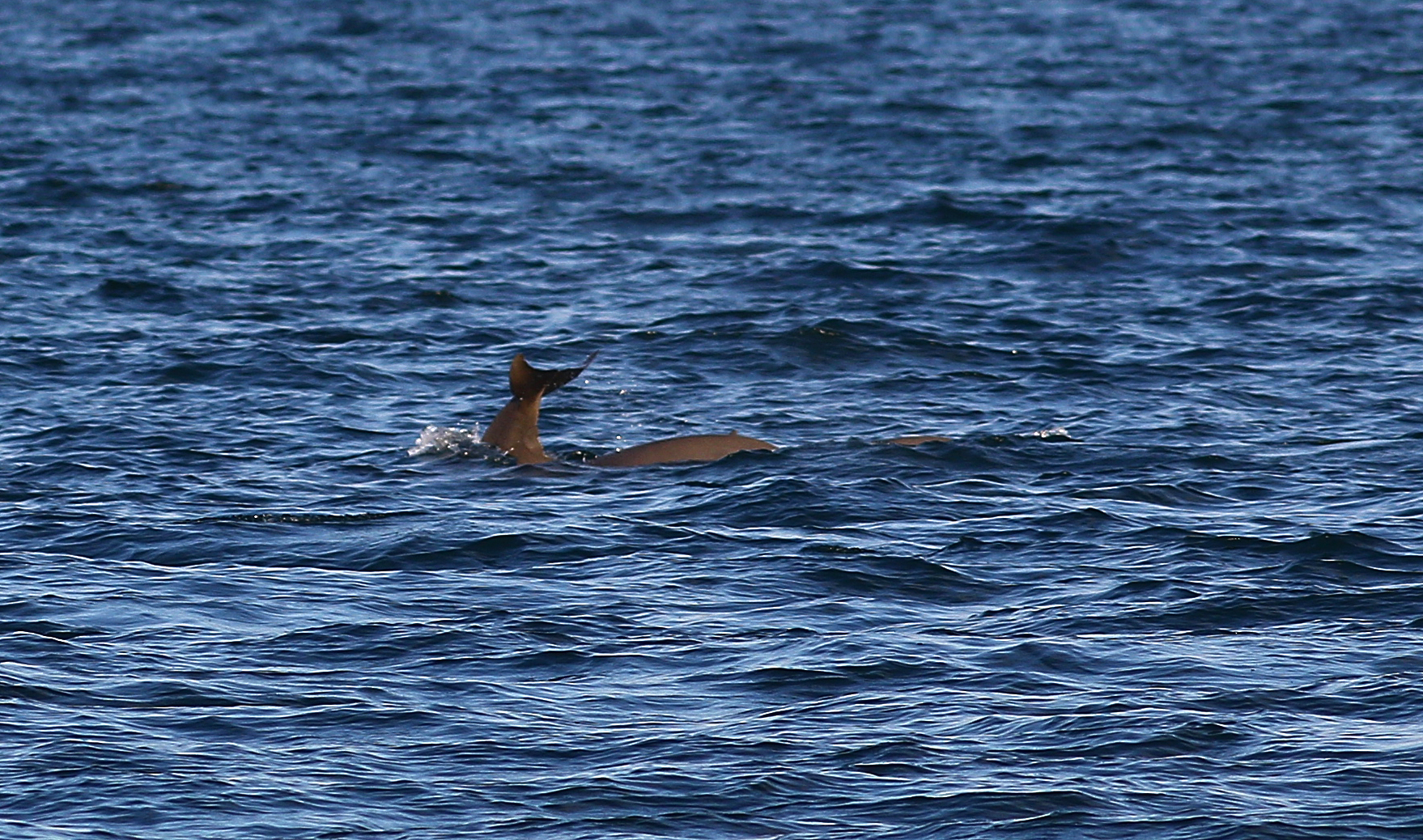 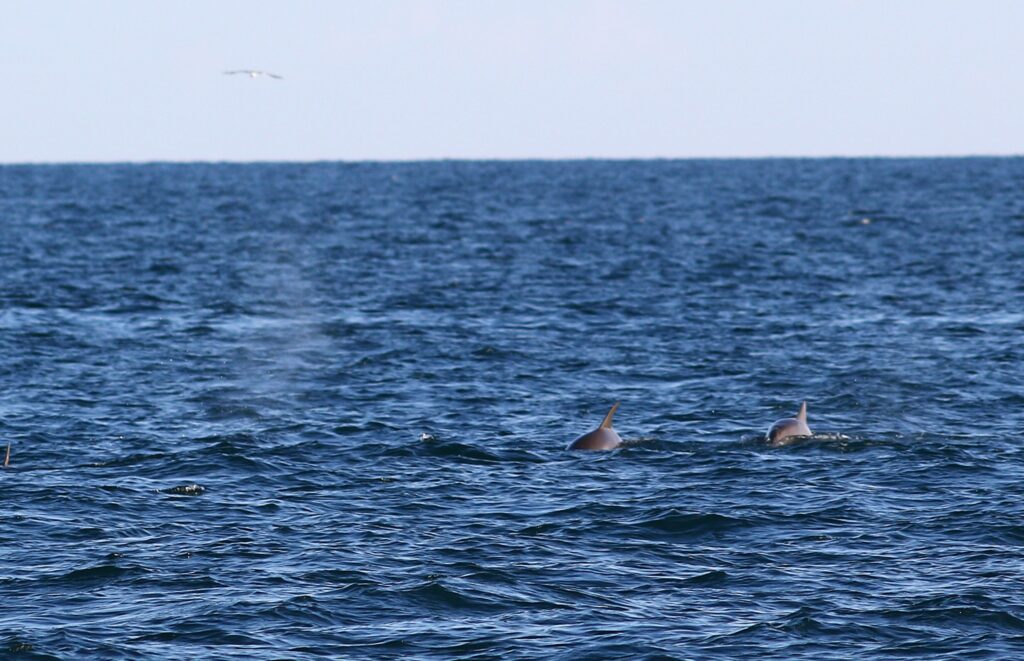 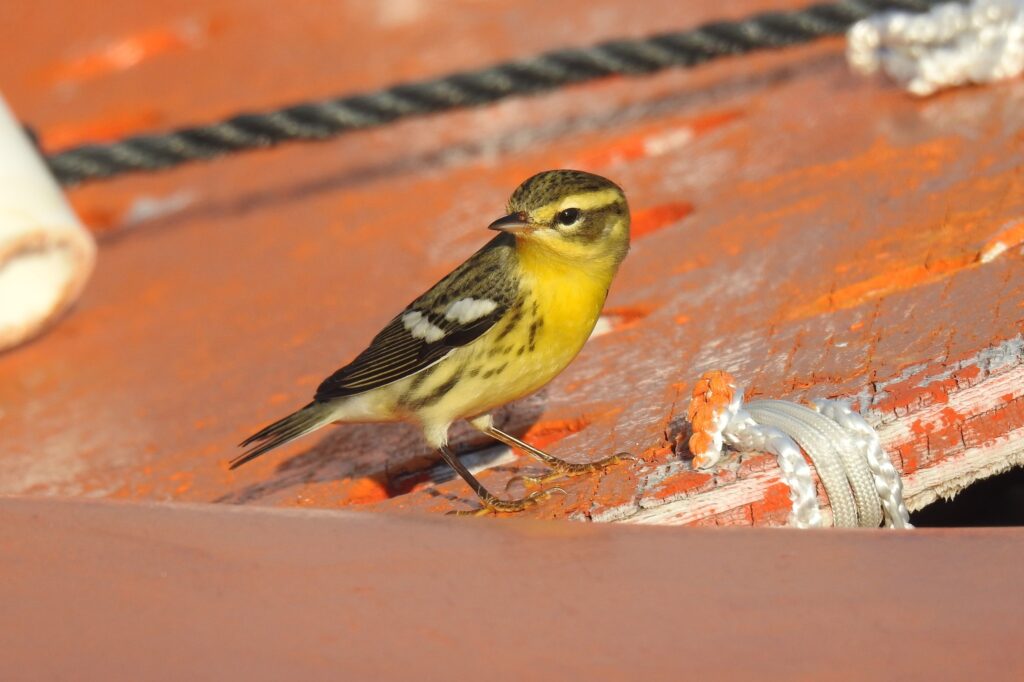 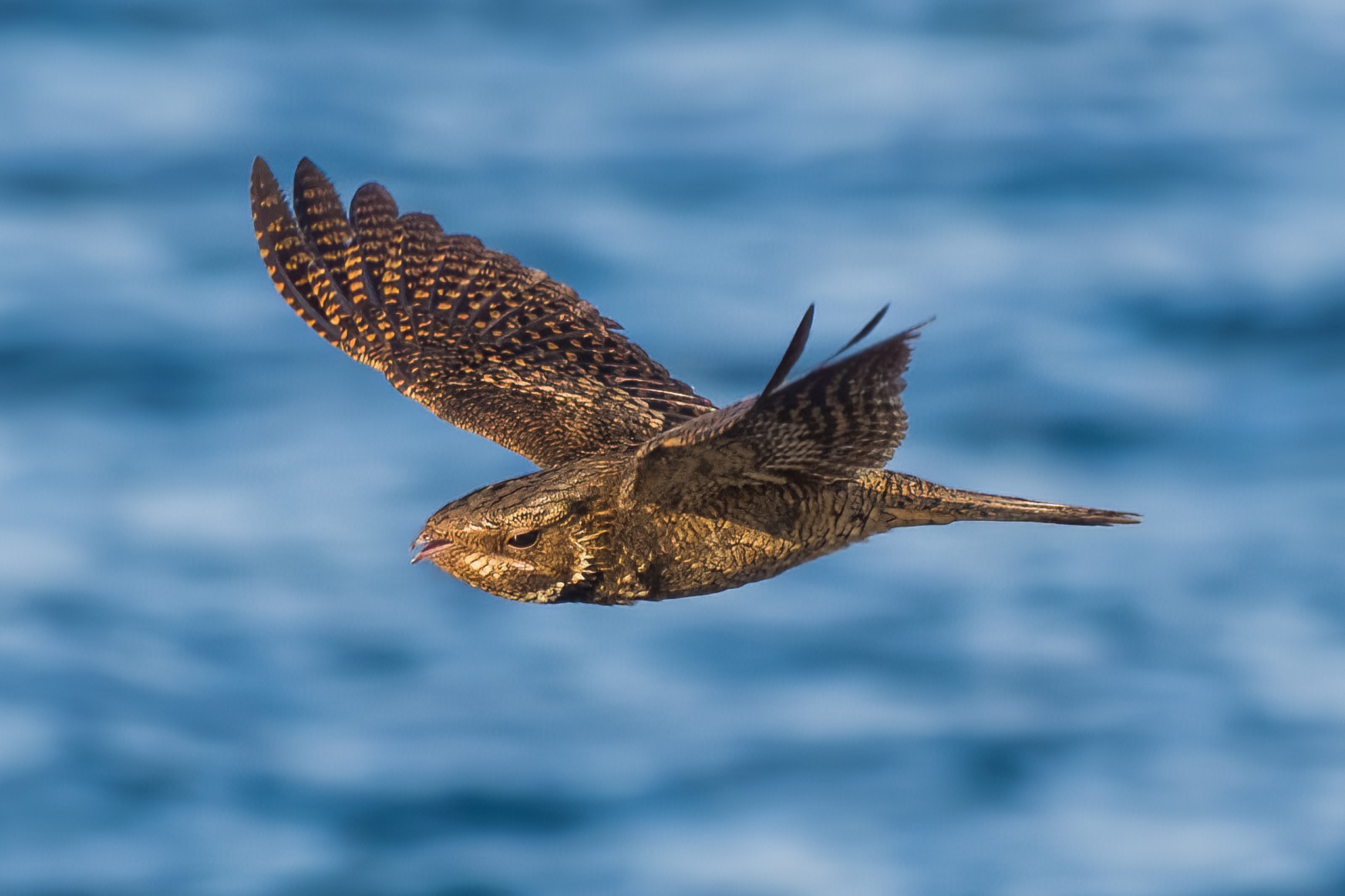 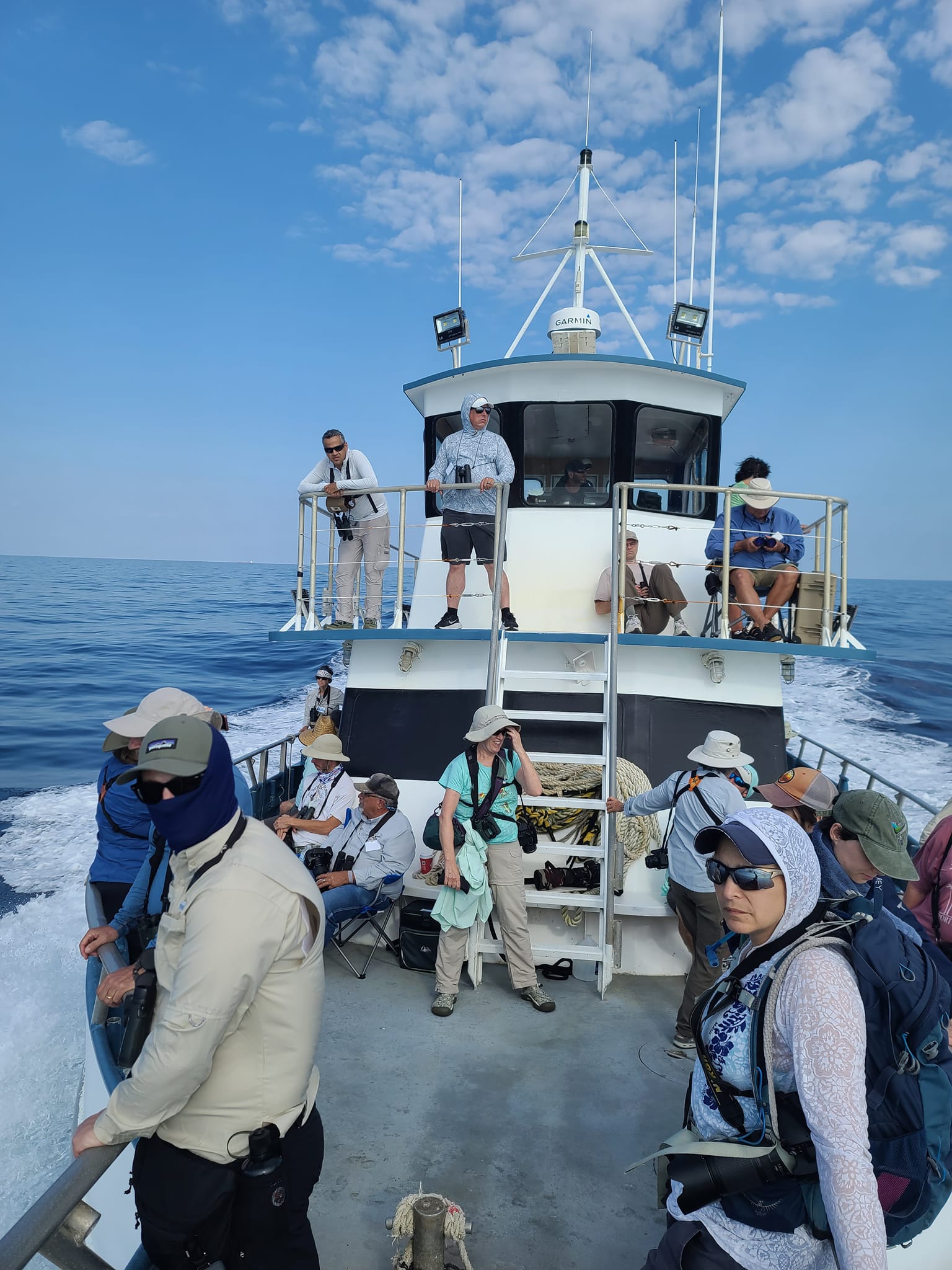 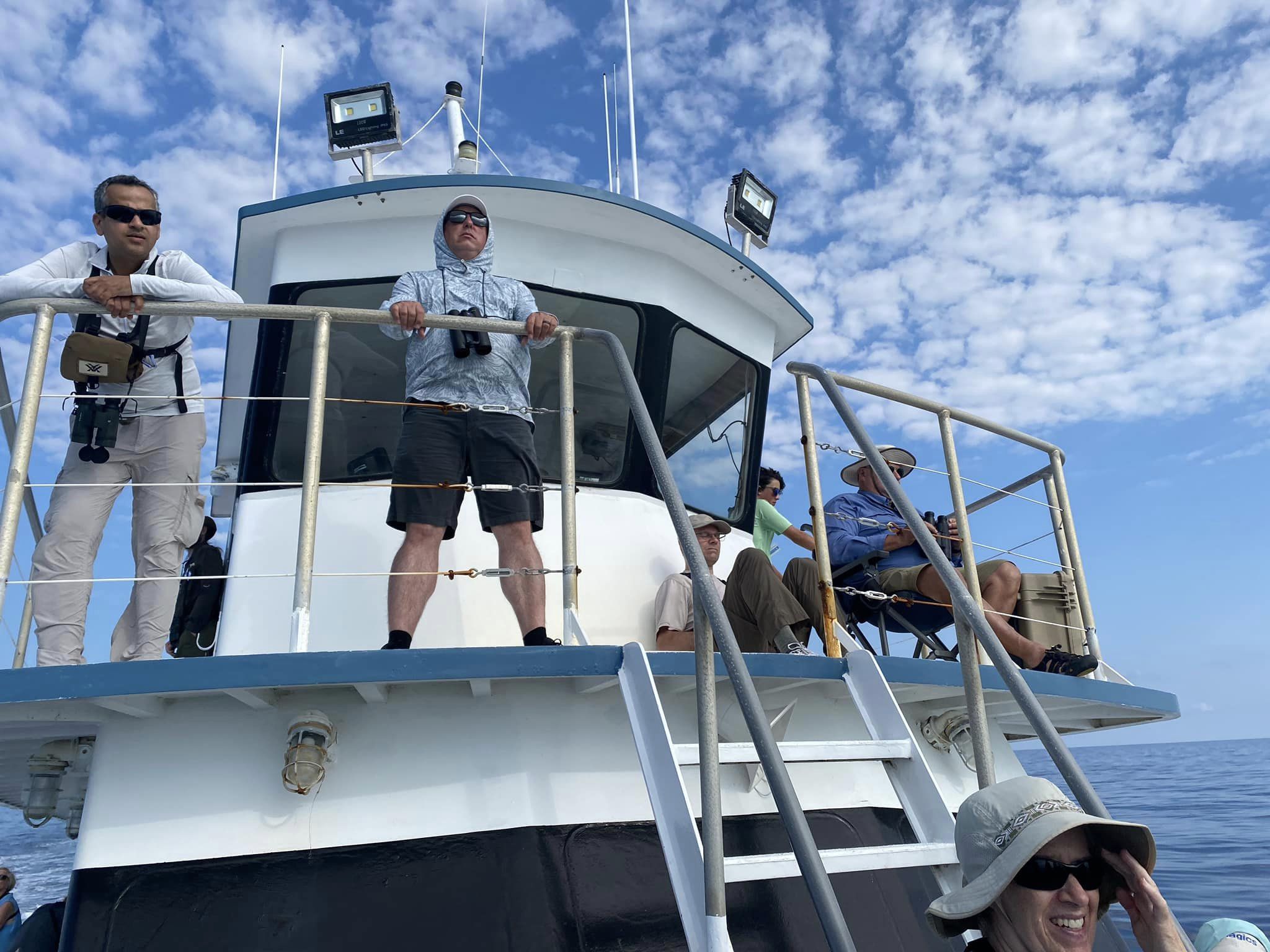 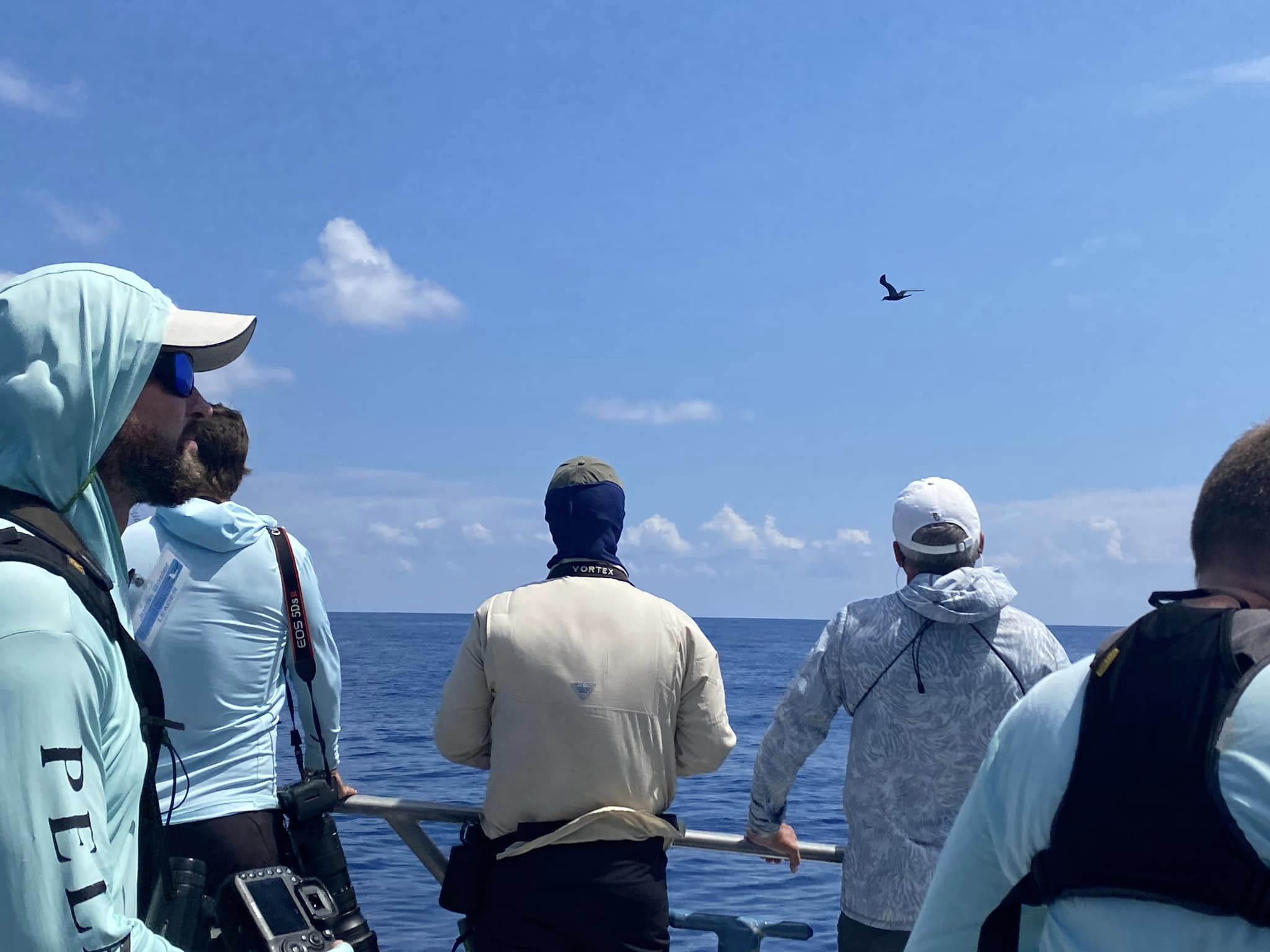 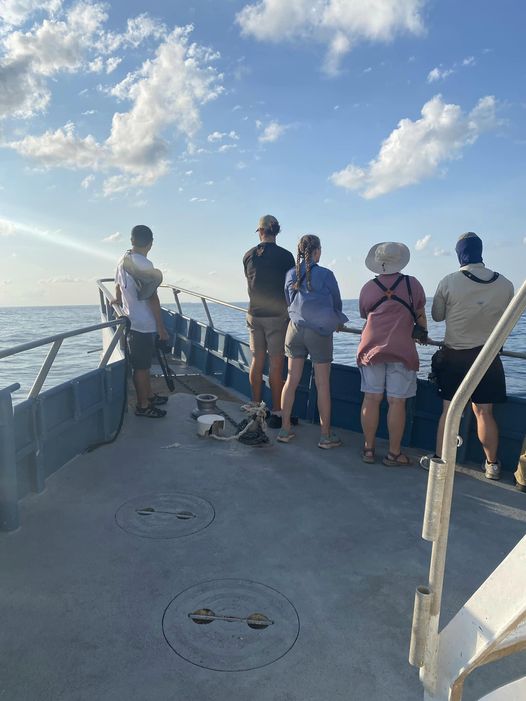 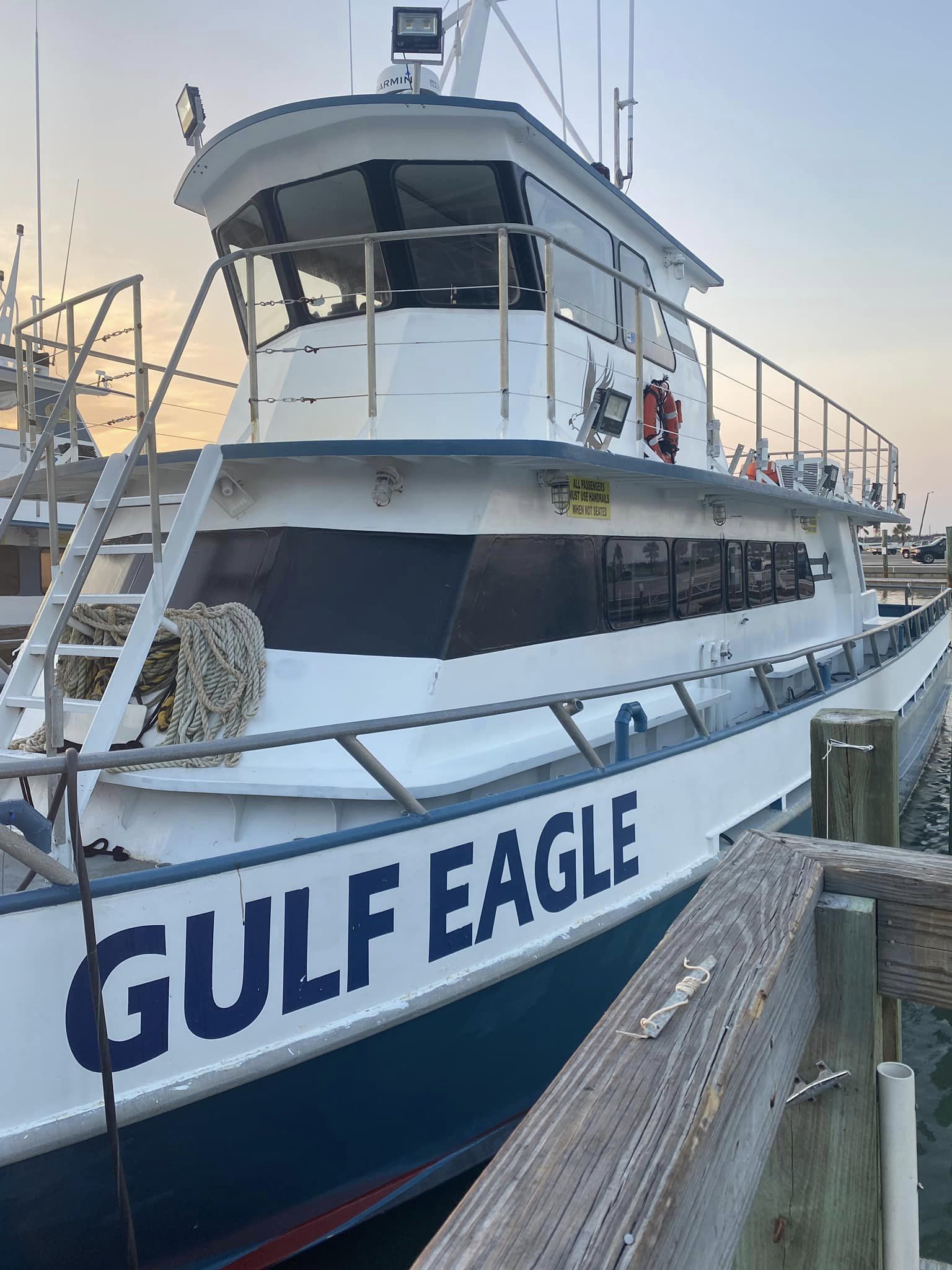 If you keep a Texas State list, you’ll definitely want to go on multiple Texas Pelagic trips to add these pelagic birds to your state list. You may find they can become addicting after a few amazing trips. The pelagic seabird species we always expect to find include: Cory’s, Scopoli’s (not yet a full species by AOU but will be eventually) and Audubon’s Shearwaters, Band-rumped and Leach’s Storm-Petrels, Bridled and Sooty Terns, Masked and Brown Booby, Pomarine and Parasitic Jaegers, and Magnificent Frigatebird. But almost without fail every trip seems to find a nice rarity or two including all these which have been seen on Texas Pelagic trips multiple times: Manx Shearwater, Great Shearwater, Sooty Shearwater, Brown Noddy, Long-tailed Jaeger, South Polar Skua, Sabine’s Gull, Red-billed Tropicbird. As if that’s not enough we do occasionally get a mega-rarity like the famous Yellow-nosed Albatross, or Arctic Tern, and Black-capped Petrel. Other seabirds seen in Texas waters very-rarely are always a possibility. This could include: Wilson’s Storm-Petrel, Trindade Petrel, Wedge-tailed Shearwater, Red-footed Booby. The complete list of Texas Pelagic Species can be found here: Texas Pelagic Seabirds

If you’re a Texas Century Club birder and are working on Coastal County lists taking a pelagic trip is an easy way to add species to your county lists. I’ve posted our planned course to the Texas Pelagics website so you can get an idea of the eBird Counties each trip will be birding in. These maps include the offshore county lines as determined by eBird. (Despite eBird’s claim the county lines it calculates are not strictly the nearest point of land.) 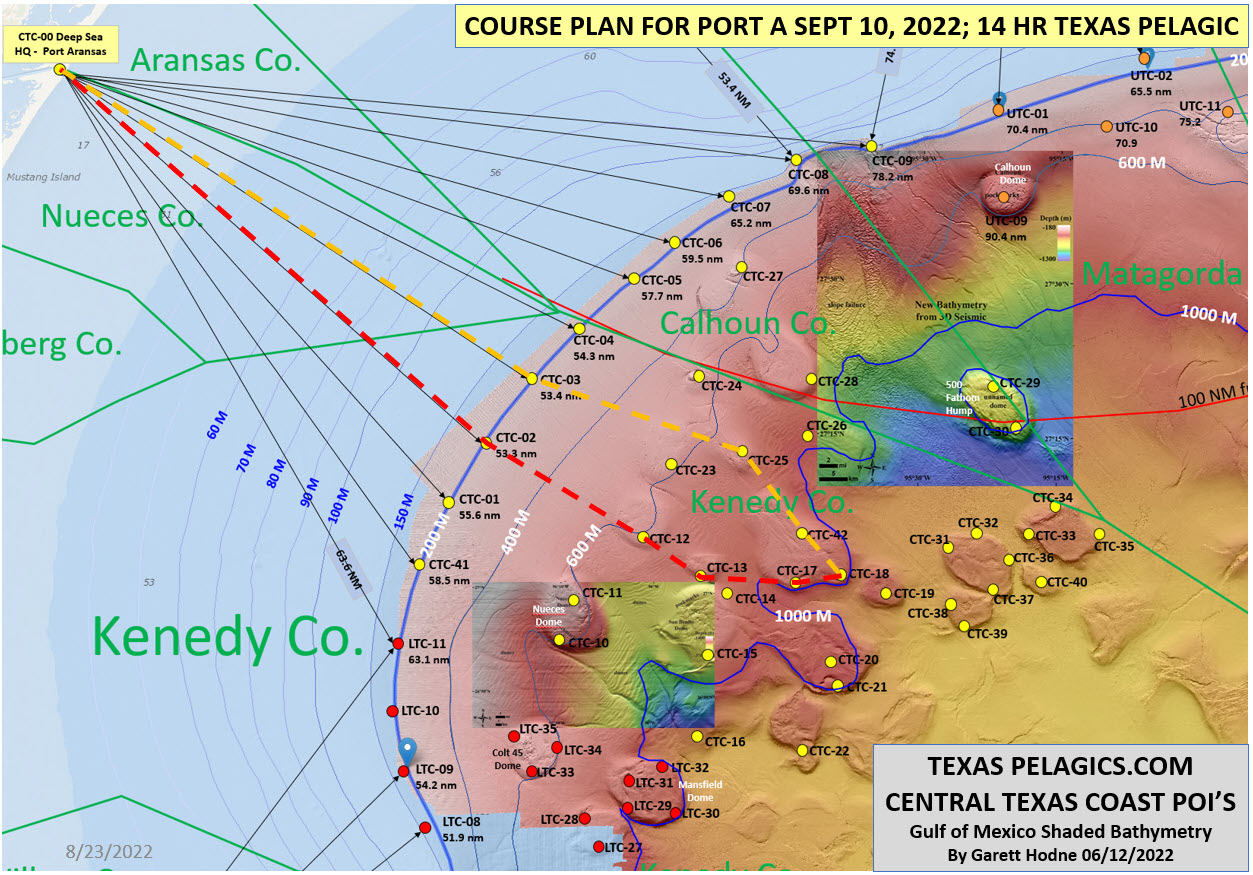 The planned course for this pelagic is shown by the dashed lines.

© Copyright 1998-2022 Garett Hodne. All materials on all sites within this domain are copyrighted by Garett Hodne. Some individual items may be copyrighted by the author, photographer, or other sources as noted. All rights are reserved. All material is available for personal and private use only. However all material herein may not be reprinted, re-distributed, copied to other websites or reproduced for public use in any way without the express advanced written permission of the webmaster.